If an absence is necessary, call the school office at (916) 686-1725 the morning of the absence, send a note to the school office or email Mrs. Asbury or Mrs. Vierra in the office. The note should include the dates of the absence and the reason for the absence.
Excused absences include but are not limited to:
Enrollment
For information on enrolling your child in the Elk Grove District:
*School registration packets are available in our front office.
School History 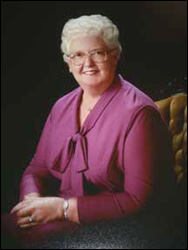 Helen Anita Carr Castello (1908 – 2001)
Helen Anita Castello was born on March 28, 1908 on the Carr Ranch which is located near the intersection of Grantline Road and Waterman Road. Her parents, George Carr and Fanny Baker Carr, were both born and raised in the Elk Grove area.
Helen’s grandfather, George Thomas Carr, had come from New Hampshire to Nevada to raise sheep. In 1875, he bought the Carr Ranch from Clinton Henley Cantrell, Helen’s future husband’s grandfather.
Helen’s father, George Carr, was also born on the Carr Ranch. He attended school at the San Joaquin Grammar School at the corner of Grantline Road and Highway 99. He farmed on the Carr Ranch dairying and raising grapes, grain, and turkeys.
Helen’s grandmother, Mary Emily Farnsworth Baker, came from Canada with her husband, Robert Baker. They first settled near Bruceville, California. After a time, Robert Baker bought a ranch where Elk Grove Boulevard intersects Highway 99. He raised grain and ran a dairy there until he retired in 1945.
Helen’s mother, Fanny Baker Carr, the third eldest of ten children, was born on the Bradford Ranch, where the family had settled on Bruceville Road. She grew up in Elk Grove and attended Elk Grove Grammar School. She met George Carr while both were attending social activities at the Methodist Church in Elk Grove. They married and lived on the Carr Ranch.
Helen lived on the Carr Ranch for 26 years. She and her brother Robert attended the San Joaquin Grammar School where their father had previously attended. She was in the first class to attend the Elk Grove High School at the campus located where the Joseph Kerr Middle School now stands. She graduated in 1926. From there she attended San Jose State Teacher’s college and received her teacher’s credential in February of 1929.
Helen first taught in Oleta, later renamed Fiddletown, in Amador County. This was a one-room schoolhouse with all eight grades. She took over as a substitute teacher. She recalled preparing one eighth-grade girl for the county examination to receive her graduation diploma.
The following year, in 1930, Helen transferred to the Carroll School on Bruceville Road. There she taught grades 1-4.
In 1931, Helen transferred again to the Joint Union Elementary School in Courtland, where she taught 4th grade and music to grades 4-8. In addition to the regular curriculum, she recalled frequent picnic lunches under the eucalyptus trees. She also directed annual operettas. She taught there until 1934, when she was required to retire because she was to be married.
On June 30, 1934, Helen married Clinton Cantrell Castello on the Carr Ranch. He was the son of Levi Shockey Castello and Minnie Cantrell Castello, who both had grown up in the Elk Grove area. Cantrell Castello had known Helen since she was about ten years old, when she had taken piano lessons from his mother.
He had graduated from the Victory School in Elk Grove in 1922 and was also a member of the 1926 graduating class of Elk Grove High School. While Helen was attending San Jose State Teacher’s College, Cantrell attended Sacramento City College.
After their marriage, Helen and Cantrell moved to a new home on the Cantrell Ranch, which later became known as the Castello Ranch. It is located along Highway 99 and the Cosumnes River. There they raised four children who attended Elk Grove Grammar School and Elk Grove High School: Mary Etta Hamzawi, who resides in Baghdad, Iraq; Margaret Ehlers, who resides in Rancho Murieta and teaches at Herman Leimbach School; Clinton Castello, who resides in High Rolls, New Mexico; and Carolyn Flood, who resides in Fair Oaks and teaches in Folsom.
Helen was an active participant in various community activities. She was a past president of the Native Daughters of the Golden West. She was a member of the United Methodist Church, where she taught Sunday School and was president and secretary of the Camellia Circle of the United Methodist Women’s Group. She was a member of the Elk Grove Book Club. Helen served as a leader and a trainer for the Tierra Del Oro Girl Scout Council. She also was 4-H leader.
In 1957, Helen returned to teaching when the Anna Kirchgater School opened. She taught 4th grade there for three years. In 1960, she transferred to Elk Grove Elementary School where she taught 4th grade until her retirement in 1972.
By then, Helen and Cantrell had moved from the Castello Ranch to a home on Sara Street in Elk Grove. She lived there until 1988, when she moved to Rancho Murieta.
Helen reminisced about the growth of Elk Grove and recalled the parents she taught whose children were also in her classes. As she encountered previous students, they frequently reminded her of the music program she taught, the stories she read to them, and the effect she had on their lives.
Submitted by Margaret Ehlers and Carolyn Flood